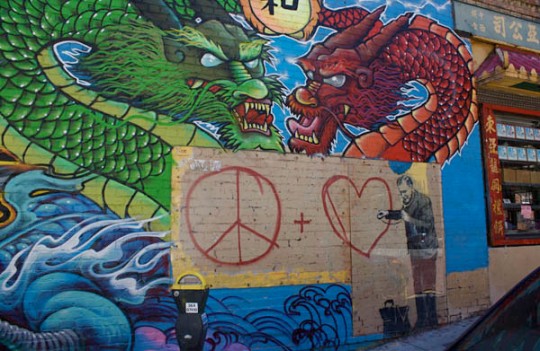 In April 2010, to coincide with the premiere of Exit Through The Gift Shop, Banksy bombed San Francisco with six pieces of original street art. While five of them have since been painted over, one still exists in San Francisco’s Chinatown. So last weekend I headed there with camera in tow.

It’s found on the side wall of the Eastern Bakery (opened in 1924, it’s the oldest Chinese bakery in the U.S.). Banksy paid the bakery’s owner $50 for the use of his wall. It still exists because someone (either the bakery owner or art enthusiasts) mounted plexiglas over it to keep it from being painted over or vandalized. The Chinese dragons mural went up around the Banksy a year later, which just makes the whole scene that much more surreal.

If you’re ever visiting San Francisco you can find this original Banksy at 720 Grant Street, between Commercial and Sacramento Sts. Stop in the bakery and buy a few pastries while you’re at it … they’re really good!

This is the voice of a man searching for meaning