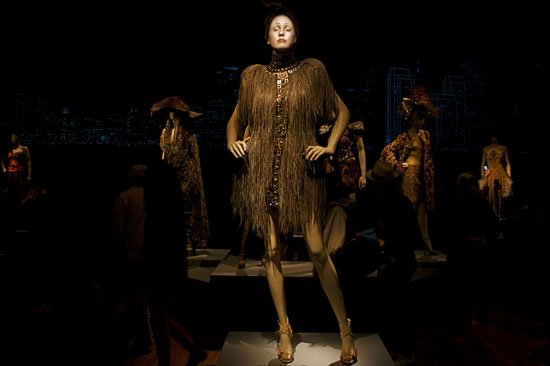 I got such positive reactions to the Jean Paul Gaultier exhibit shots that I posted as part of last week’s Photo Challenge that I decided to create a Photo Essay designed to further illustrate the width and breadth of this amazing exhibit from this iconic fashion designer.

Gaultier, of course, is arguably one of the best known of the modern haute coutre fashion designers. He deftly manages to marry fashion, art, video, design and music into his brand, and he is famous for dressing singers and musicians as diverse as Madonna, Kylie Minogue, Depeche Mode, Green Day, the late Hong Kong superstar Leslie Cheung, Marilyn Manson, and many, many others. He has also designed costumes for movies such as Luc Besson’s The Fifth Element, Pedro Almodovar’s Kika, Peter Greenaway’s The Cook, The Thief, His Wife and Her Lover and Jean-Pierre Jeunets’ The City Of Lost Children, as well as countless music videos.

The exhibit itself was astonishing, almost overwhelming, touching on all aspects of Gaultier’s illustrious 40-year career (fun fact: Gaultier never received any formal training as a designer). The attention to detail was typically flawless, and clever turns made the exhibit fun and interesting. For instance, the “faces” of the some of the mannequins were actually projected onto the heads from video projectors mounted to the ceiling, giving the mannequins actual moving facial features with blinking eyes and moving mouths. Speakers inside gave each of them a voice, and they talked, laughed, sang and even cried, mostly in French.

The San Francisco/DeYoung exhibit closed this past weekend, hopefully heading for a city near you. Until then, ladies and gentlemen, I give you the classic haute coutre fashions of Jean Paul Gaultier. 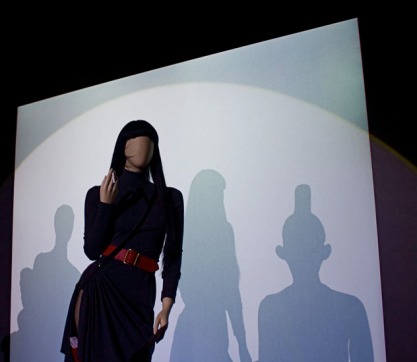