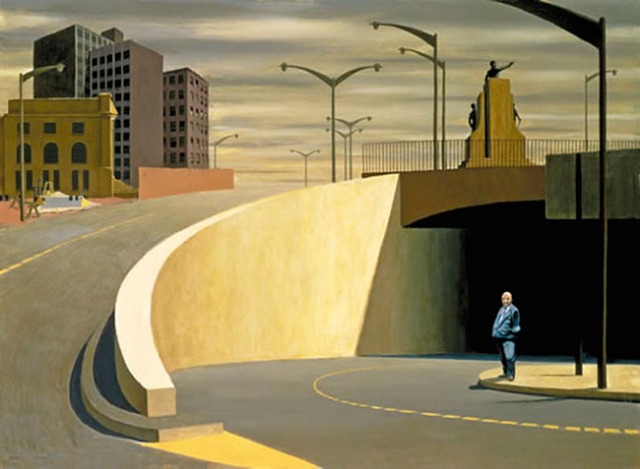 Last week the art blogs and websites were lit up over the death of prominent Australian artist Jeffrey Smart, who passed away on June 20 at the age of 91 at his home in Italy. Though he lived more than half his life in Italy, Jeffrey Smart was regarded as one of Australia’s greatest artists, and along with Albert Tucker, Charles Blackman, Sidney Nolan and Brett Whiteley, he was also considered one of the leading Australian twentieth century modernists. Another expatriate Australian, Clive James, once wrote Smart was the “modern Australian painter whose paintings look least Australian”.

Indeed, rather than beautiful Australian landscapes, Smart choose to portray an urban life of factories, trucks, roadways and vacant lots. He was moved by man in man-made nature and not concerned with your typical landscape. His paintings take everyday symbols of modernity and transform them into remarkably still, harmoniously composed images (Smart once said, “… to me, composition is everything.”) Human figures are often small and isolated, regarded by many as a representation of urban alienation. A feeling of loneliness runs through his work, adding to the effect of distance and alienation.

While some critics have referenced his work as surreal, others have cast him as a realist, hyper-realist, ‘off-beat classicalist’ and a metaphysical painter. Smart himself famously and smartly choose to never classify his art, contending that it’s the modern urban world that’s surreal and not his depictions of it.

A prolific artist, he produced at least 799 works between 1939 and 1982, and had continued to produce new work up to last year. Here is but a small sample of the work of this important and influential twentieth century artist.

Hi, I'm Stephen Kelly, a writer, editor, photographer and graphic designer living in beautiful San Francisco, CA, USA. Amongst the things I love are writing, photography, movies, music, fitness, travel, Batman, all things Australian, food and fun, all of which I hope to reflect in this here blog. Welcome aboard ... now let's get busy!
View all posts by Stephen Kelly Creative →
This entry was posted in Art, Weekly Art and tagged Art, Artist, Australia, Italy, Jeffrey Smart. Bookmark the permalink.