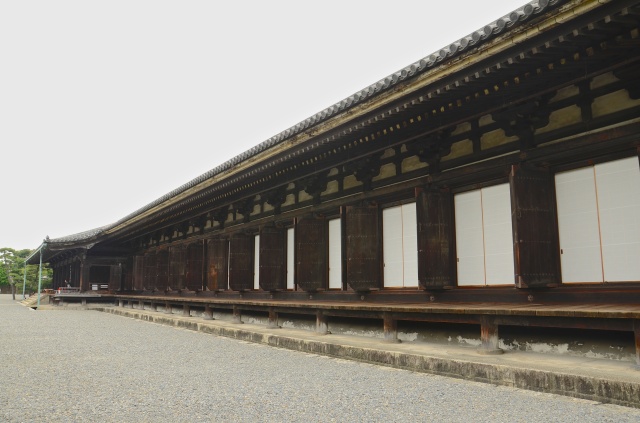 This is Sanjūsangen-dō, a Buddhist temple in Kyoto, Japan that at 390 feet (120 meters) in length is the largest wooden structure in Japan. Built in 1164, its name translates to “Hall With Thirty-three Spaces Between Columns,” which describes the 33 sanjusan (bays) between the building’s support pillars, a traditional method of measuring the size of a building. A deeply spiritual place, it is also houses an amazing collection of traditional Japanese religious art.

Sanjūsangen-dō is dedicated to Kannon, the Buddhist divinity believed to assist distressed humans and lead them to enlightenment. According to Buddhist belief, Kannon is said to assume any of thirty-three forms in which to be of assistance, giving traditional resonance to this long, narrow building’s 33 bay design. 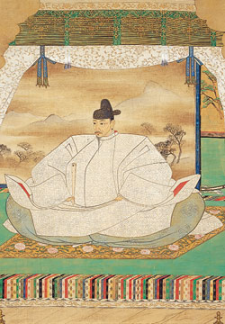 Retired emperor turned religious man Go-shirakawa commissioned the building of the original temple (called Rengeō-in) in 1164. A fire destroyed Rengeō-in in 1249, and the main hall was faithfully reconstructed in 1266. An annual archery competition known as Tōshiya has been held on the temple grounds since the Edo period of 1606.

Like many places in Kyoto, the temple complex has a hushed, serene feel, and the area outside of the temple features a serenity pool, wash basin, traditional bibbed monuments, and a post where people can write well-wishes on slips of paper. The entire area is walled, and punctuated by massive gates painted in vivid orange, nearly everything made from wood.

While the exterior of this temple is indeed impressive (I couldn’t fit the whole structure into a single frame) it’s what’s inside that makes Sanjūsangen-dō a must-see Kyoto destination. After entering the building from a side entrance, you stroll down a long hallway that features paintings and artifacts describing the temple’s rich 850-year history. One of the more fascinating exhibits tells the story of a legendary duel between famous warriors Miyamoto Musashi and Yoshioka Denshichirō fought outside the temple in 1604. 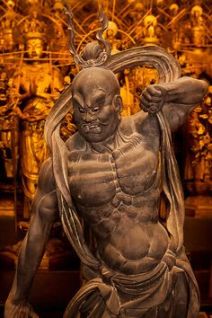 But turn a corner and you are met with the intense sight of 1000 life-size sculpture of the Thousand Arm Kannon, each nearly six feet tall. These statues are situated in 10 rows and 50 columns on both the left and right sides of the main temple, flanking a larger, 11-feet tall Kannon seated in the middle. 124 of these statues were rescued from the 1249 fire while the remaining 876 statures were built in the 13th century. In front of the 1000 Kannon stand 28 statues of guardian deities, each with its own unique story and distinctive facial expressions.

Amazingly, each of these Kannon statues are made from wood (Japanese cypress), then lacquered and covered with gold leaf. Subtle yet cleverly strategic interior lighting reflects off the statue’s gold leaf finish, bathing the room in a pale golden aura.

The sight is truly mesmerizing, almost surreal, and one of the most impressive of my trip to Kyoto. However, be forewarned that photography is expressly forbidden inside the main temple. Of all the temples I visited in Kyoto, Sanjūsangen-dō had the strictest No Photography policy, and there are many signs saying as such. In fact, if you’re even suspected of snapping a pic, temple guards will ask to see your camera so they can check. (That said, I took all of the exterior shots you see here, while pics of the interior were providing by the generosity of the Internet.)

So cool that itchy shutter finger once inside the main temple, and just soak in this truly one-of-kind sight. Stunning in every way, put Sanjūsangen-dō near the top of your must-see list when visiting Kyoto. 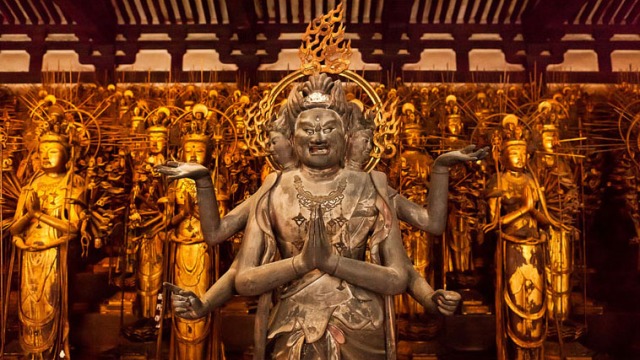 Check out the gallery after the jump!