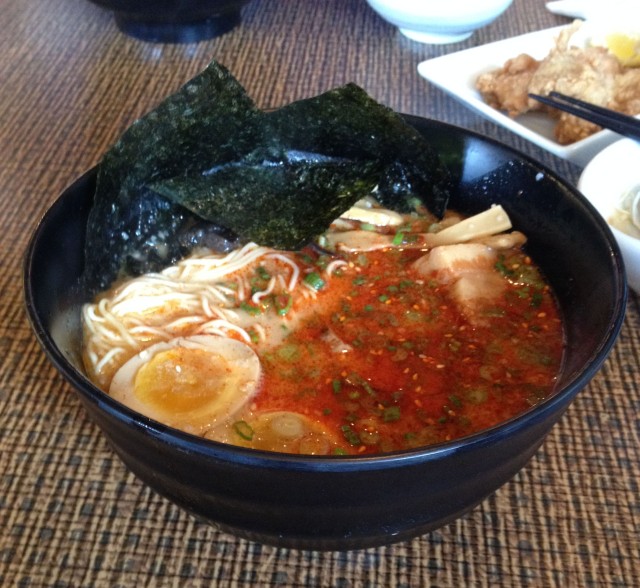 When it comes to temptations, most of mine are food-related, and I find it difficult to resist the siren call of salty snacks, pizza and good red wine. But when it comes to specific food temptations, those that I’m powerless to resist, I’m all about the spicy! It just can’t be hot or spicy enough for me, and I’d sprinkle red pepper flakes on my cereal if it were socially acceptable! My never-ending search for perfection in spicy foods has covered many different cuisines, and has even taken me to other countries, from Szechuan Chinese to Mexican to Indian to Thai, often with painful yet satisfying results.

I guess the bottom line is if it’s hot and spicy enough to clear my sinuses, cause beads of perspiration to form on my forehead and to bring about a light-headed, slightly dizzy feeling, then I’m a happy fellow, no matter the cuisine! But it’s only when I start sneezing that I know that I have reached spicy nirvana. 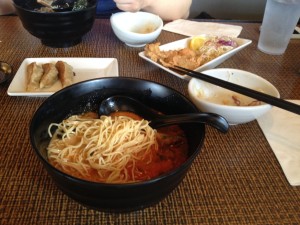 … halfway through, the heat starts to rise …

Yes, I’ve enjoyed many fine three-alarm meals in my time (I’m looking right at you Mai Lai Wah in Philadephia’s Chinatown), but few spicy foods float my boat as much as a steaming bowl of spicy Japanese ramen. It combines many of the things I love in food: a hearty, tasty soup, tender and delicious veggies, pork and beef, chewy noodles and, of course, a hard-boiled egg that just gets softer and tastier the more it soaks in the broth. Just the thought of it is making me drool!

So naturally I was jazzed on hearing of a new ramen restaurant that recently opened in San Francisco’s Japantown, and a visit was quickly in order, especially after a friend told me that their spicy ramen is indeed spicy. Of course, what’s spicy to some might elicit a ‘meh’ response from me, and I feel about such claims the same I feel about cheese steak restaurants that aren’t in Philadelphia that boast of being “authentic” Philly, or like the place in San Francisco’s North Beach that’s “better than Philly” … and, of course, it’s not … not by a long, sad shot. So regarding the heat level claims of this new place, this native Philadelphian might say, “I’ll be the judge of that.” 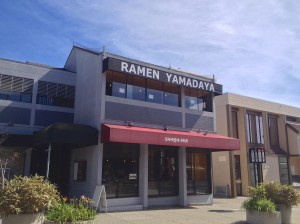 And I’m happy to report that the spicy ramen at the new Ramen Yamadaya didn’t disappoint. I was able to check off all my prerequisites mentioned earlier, especially a really yummy broth and a hard-boiled egg that just burst with flavor. Curiously, the spicy ramen actually had quotients or rankings, with one being mild to three being three-alarm. That’s not something I’ve seen very often in ramen joints.

Now, you might think given my background I would naturally go for the spiciest, but in the case of a new place, I really need to taste the broth as well, because that’s just as important as the heat. Some ramen places make it so spicy you can’t taste anything else but heat, until your taste buds go numb and your tongue wants to literally rip itself free from your mouth, relieving itself of its ramen-induced agony … like Ramen Kan, a fun noodle bar in Sydney’s Haymarket that absolutely kicked my ass … twice!

So I went with the second choice, and at first I was a little disappointed. Awesome ramen, but where’s the heat, despite the devilish deep red color of the broth that you can see in the pics. But then, sneakily, subversively, the heat started to rise and with it came all the old familiar yet strangely pleasurable physical reactions: the beads of sweat on the forehead, the slight throat constriction, fluids literally flowing from both nostrils, shaky hands, that woozy feeling of disorientation … ahhhh! Now I need a cigarette and a cold shower.

Interestingly enough, I started sneezing just as the waitress came over to see if the ramen was spicy enough for me.

Now, psychologists out there might have something to say about the interesting (some might say bizarre) pain/pleasure interplay at work here, but I’m not going to get all deep about it. Just let’s say that when it comes to temptations, I say, bring da heat …  and the hotter the better!!!