Tokyo On The Go: Akihabara, aka “Electric Town”

So far in these posts I’ve taken you to some of Tokyo’s quieter, off-the-tourist-paths, but if you’re looking for the full-on, in your face, big city Tokyo experience, then you need to visit Akihabara, otherwise known as “Electric Town.”

A popular district in the Tokyo’s Chiyoda ward, it is indeed electric, in its many electronics and gaming stores and in its busy, space-age pace. And typical of a place that’s internationally known as the otaku (geek culture) anime and manga epicenter, Akihabara is fast, colorful, noisy, quirky, and really exciting; in short, everything you expect from Tokyo’s bigger districts. 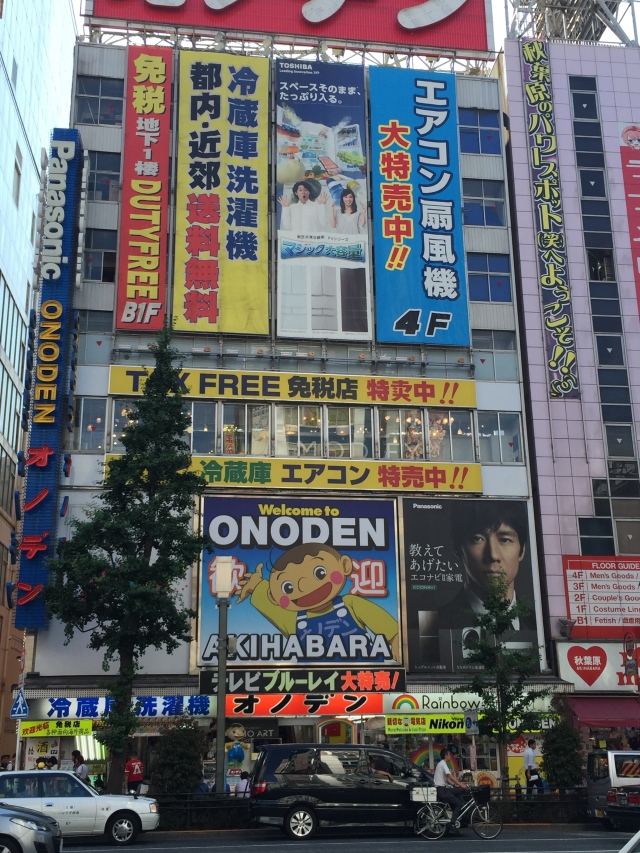 I’ve been to Akihabara in previous trips, and for many reasons, it’s one of my favorites parts of Tokyo. I really love the bustling excitement of this intensely colorful place. I also love its tall, soaring, gleaming glass buildings that, like most things in Tokyo, are often plastered with clever, colorful advertisements … 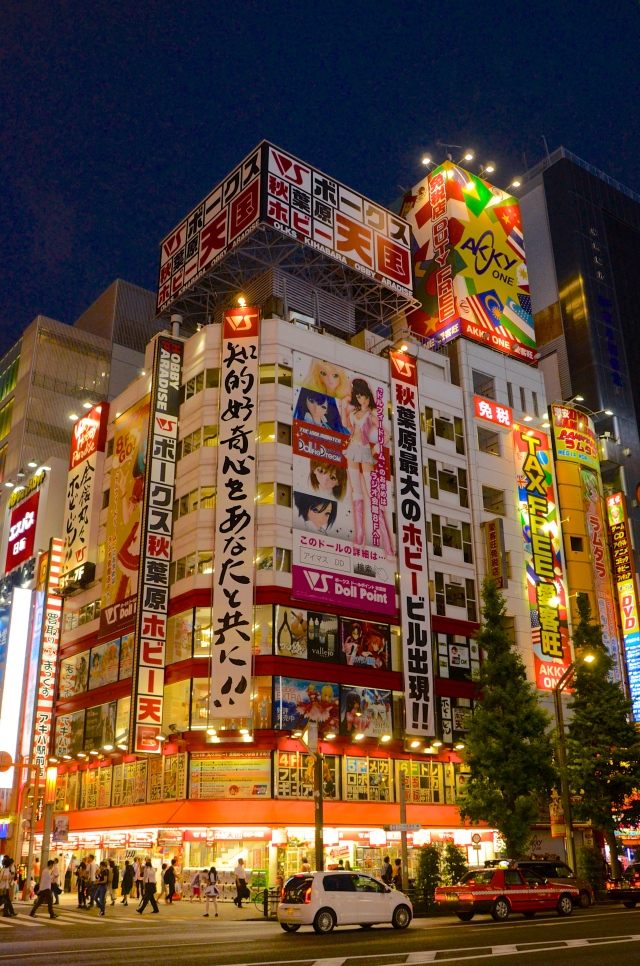 … in Akihabara, it’s not unusual to see a five-story advertising banner hanging from a ten-story building. 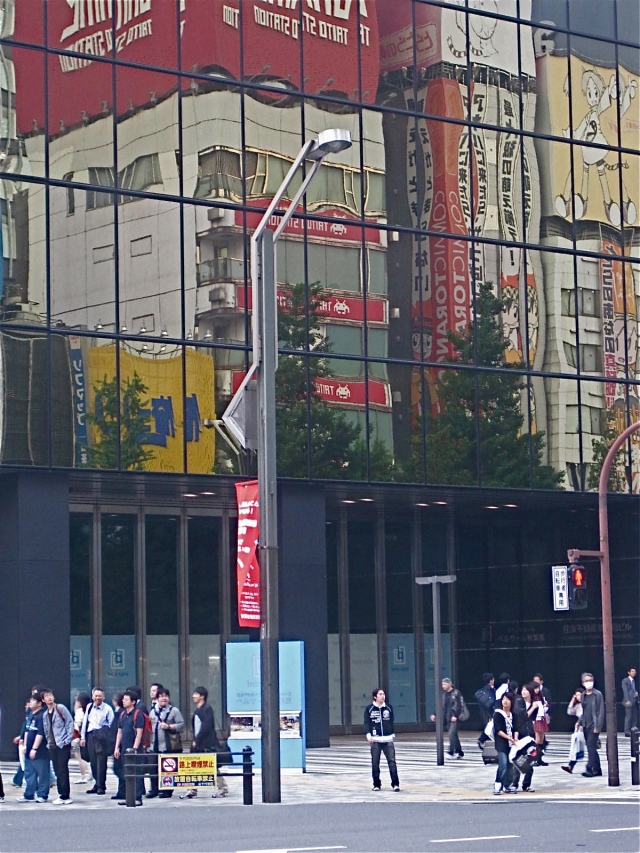 The few buildings that are not covered by advertising often display interesting reflections off of their glass facades, adding to the kaleidoscopic, slightly surreal feel of the entire area.

In Akihabara, it pays to look up, because that’s where you can see some interesting design, whether with the mile-high advertising or architecturally. Of course, looking up while navigating the crowded streets can be something of a challenge, especially if you’re trying to take a picture, and Akihabara is a great place for photographers to learn how to shoot on the run.

But mostly I like visiting Akihabara because it’s so much fun! The influence of otaku culture has shaped Akihabara’s businesses and buildings to reflect those interests and gained the district worldwide fame for its distinctive imagery. Akihabara succeeds in creating an atmosphere that’s as close as possible to the gaming and anime worlds, and everywhere you turn there’s a happy, colorful advertising icon waving and smiling at you. It’s a really happy place!

This guy’s arms and legs moved, making it look like he was running to greet you.

Now, I’m not particularly into that otaku world of anime and manga, but it’s impossible not to get caught up in the color and energy of the district, and there’s something fun and interesting to be found everywhere. Visitors are rewarded by veering off the popular main drag into the many side streets and alleys that are dense with … well, everything, really.

Fun fact: Akihabara was named “Electric Town” after World War II when the area became a major shopping district for household electronic products. When the interest in home goods faded in the 1980s, Akihabara shifted its focus on the then burgeoning home computer markets, and has since become a mecca for those looking for gadgets of all types. If it’s electronic and you can’t find it here, then it hasn’t been invented yet. For computer geeks (and I mean that in the best way), Akihabara is nirvana.

Avid shoppers will be delighted to find that many stores in all parts of Tokyo are tax free, a government-based incentive designed to stimulate the ailing Japanese economy. In many stores, foreign visitors need only to show a passport to get the same tax-free price break. And in an area like Akihabara where you can find some big ticket electronic items at decent prices, a tax break can be pretty sweet. 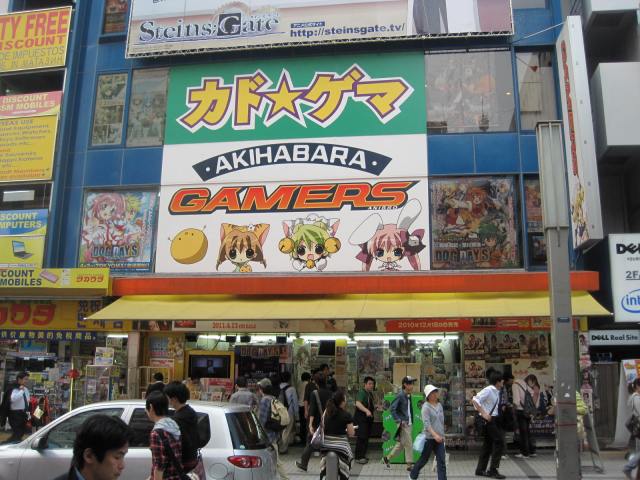 Of course, as Akihabara is known as the otaku epicenter of the world, popular icons from anime and manga are displayed prominently in and around the area’s shops.  The Gundam robots of Japanese anime fame are so popular that they have their own cafe in Akihabara!

And if it’s toys you’re looking for, there’s no shortage of cool, multi-floored toy shops in Akihabara. This store had an amazing Star Wars display that I of course want for my home. 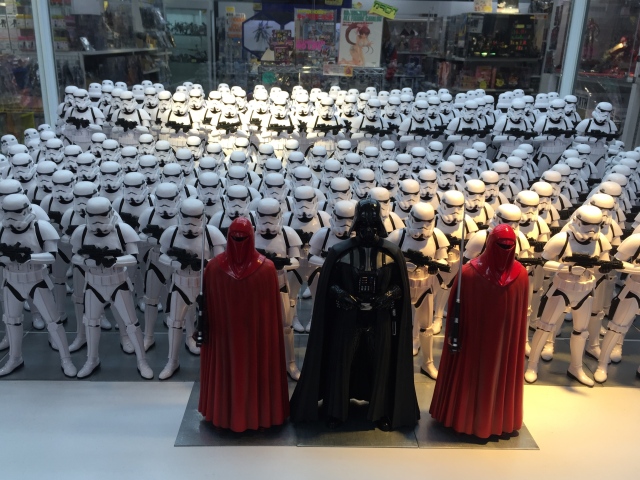 The toy stores in Akihabara are often like little pop culture museums, and the elaborate displays found in many of the stores are really impressive. Each floor in this particular store had a theme of some kind, and this top floor was packed with Marvel and DC superheroes and villains. Somewhat surprisingly, The Avengers played second fiddle to Star Wars. As suspected, Batman also figured prominently.

See? it’s the perfect place to embrace your inner dork! And don’t go thinking that these stores are for kids only. A large percentage of clientele were middle-aged men, some looking like they were coming front work. Manga comics are hugely popular in Japan, and it’s not unusual to see adults totally immersed in their manga or graphic novel on their morning or evening commute. This particular store had an entire floor devoted to nothing but manga and comics and shoppers of all ages were browsing the thousands and thousands of titles.

I’m sorry I don’t know the name or exact location of this particular store, as it was one of many I visited that day, but part of the fun of Akihabara is exploring interesting stores where you literally never know what you might find. It’s eye candy of the highest order.

Akihabara Gamers is one of the area’s largest and more popular electronic stores. Despite its name, this store’s focus is anime and manga, although it does have a fantastic selection of Japanese game magazines as well as a whole floor dedicated to video games and computer games. The upper floors typically host card game tournaments and autograph signings.

Hard core gamers will no doubt recognize the names of famous stores like Super Potato, Sofmap, Book-Off, Mandarake, G-Front and the Trader’s stores, and they each have massive stores right in the heart of Akihabara. 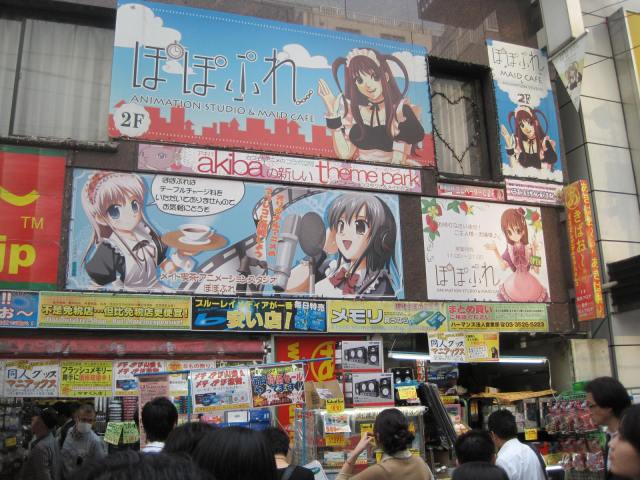 Akihabara is also widely known for its maid cafes, and as you can see from many of these pics, that presence is everywhere in the area’s advertising. In maid cafes, waitresses dressed in maid costumes act as servants, and treat customers as masters (and some mistresses) as if they are in a private home and not a café.While maid cafes naturally attract a large male clientele, butler cafes that cater to female patrons are also popular.

The maid costume varies from café to café but most are based upon French maid costumes. Employees of these cafes will also cosplay as anime characters or wear animal ears with their outfits to add more appeal. Typically, customers can order tea and coffee, pastries and desserts and dinner entrees.

Maid cafes are an offshoot of cosplay-themed, wish-fulfillment restaurants and pubs that originated in Akihabara in 1999. In the last ten years particularly they’ve become increasingly popular and competition is fierce amongst the area’s many cafes. Because of that, maids advertising their places of employment are a common sight on the streets of Akihabara.

Foodies need not worry, as there are plenty of excellent places to dine in Akihabara, serving up all of the Japanese favorites like ramen, gyoza and unagi, as well as many Western offerings for those who those who simply must have Italian food or worse, McDonalds. And for a very cool Tokyo experience (as well as some nifty food), don’t forget to visit Cafe N3331, which I featured in a recent blog post.

So if you’re looking to experience Tokyo on the go-go-go, put the exciting Akihabara area high on your must-visit list. And when there, let your inner geek run wild … you know you want to!

Here’s a gallery of pics from my visits to this amazing part of Tokyo.

Getting there:
Akihabara is easily reached from any corner of Tokyo, especially since it is connected to many different train lines, including Japan Rail’s Yamanote line, Keihin-Tohoku line, and Chuo-Sobu line, as well as Tokyo Metro Subway’s Hibiya Line, and the Tsukuba Express. Not far from the main shopping street is also Suehirocho station, which is connected to the Ginza line.

10 Responses to Tokyo On The Go: Akihabara, aka “Electric Town”