So I’m reading that teen heartthrob Justin Bieber was yesterday allegedly involved in a scuffle with a photographer outside of a Los Angeles movie theater. Beiber (and his date, teen ‘singer/actress’ Selena Gomez) left the scene before police arrived, and the photographer was taken the hospital complaining of chest pains*. At the time of this writing, Bieber is wanted for questioning by the L.A.P.D.

Normally I wouldn’t give a story this inconsequential a second look, until the words reverberated in my ears: “Justin Bieber in a scuffle?” Really? The least threatening person in the world is on the run from the cops because of his role in a street brawl? Somehow, I’m just not seeing it. Justin Bieber looks like he weighs 80 pounds when soaking wet, and he has the muscle tone of an eleven-year-old girl.

But now he’s apparently a bad ass fugitive from justice, like Batman at the end of ‘The Dark Knight.’ I can picture Bieber and Gomez fleeing the cops, roaring through the unforgiving L.A. night in his Bentley, a modern day Bonnie and Clyde — criminal lovers on the run!!! He and Gomez whoop and holler and shoot pistols into the night sky as they make a mockery of local speeding laws, occasionally pulling over to make out. Think Thelma and Louise, if Thelma were a skinny, pasty-faced white kid and if Louise were best known for her role in ‘Hannah Montana.’

It always cracks me up when pop stars decide its time to break from the teen idol perceptions, and show the world just how tough and streetwise they really are, or at least how tough they want to be perceived. First come the tattoos. Then they hang with rappers. Then, and right on time in this case, comes the public scuffle. It could be in a restaurant, outside a club, or near a trendy boutique on Rodeo Drive, but the inevitable dust-up will occur, usually with paparazzi involved.

Or, if you’re like Selena Gomez, you begin to show your rebellious side by taking great pleasure in trashing hotel rooms, knocking over furniture and writing your name in lipstick all over the walls. Gomez says she trashes hotel rooms all the time, because “it’s fun!” What a rebel! Did I mention she’s 19?

Now we have Justin Beiber reworking his image, as if that paternity suit thing didn’t prove him manly enough. So this new incident really should come as no surprise. Bieber has also recently been sporting a sky-high pompadour, hanging out with rappers, and it’s even rumored that he’s gotten a tattoo! As soon as his body hair starts growing in he can start looking all shaggy and world-weary, like John Mayer, another noted wanna-be tough guy who has had his share on run-ins with the paparazzi. Like Bieber, John Mayer looks like he can’t wait until he’s old enough to get his driver’s permit, or at least rent R-rated movies without showing an ID.

Come to think of it, Michael Jackson went through this he-man alteration as well, ironically just as he was beginning his transformation from man to whatever that was when he died. Unfortunately, the more MJ tried to act like a bad ass, the more unintentionally hilarious he looked. Here’s the least masculine, the least toughest person on the planet trying to convince everyone how bad he is. He even named an album after his new attitude!

Suddenly Michael is kicking ass in his all of his videos, whether it be mobsters, or ancient Egyptian warriors in ‘Do You Remember The Time?’ or, of course, zombies in the classic ‘Thriller.’ That last one might not count as it was filmed before MJ got all manly. Still, MJ was showing the world that he was not one to be f*^%ed with, not even by zombies! 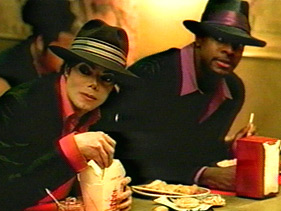 The video to ‘You Rock My World’ is particularly hilarious, especially since Marlon Brando is in it, either playing a Mafia godfather or a bloated, incomprehensible Marlon Brando imitator — I couldn’t tell which. Either way, listen closely, and you can hear the sound of clichés and careers falling to earth.

In it, MJ (accompanied by motor-mouthed has-been Chris Tucker) storms into a club, eats some Chinese food (with a fork!) and beats the crap out of a half-dozen mobsters who are dissing on MJ’s gal pal, who I think was the club’s dancer — by then my eyes had glazed over, my mind had gotten all soft and fuzzy, and I had lost almost all interest. I do, however, remember thinking how fortuitous it was that MJ’s nose didn’t fall off during one of those fight scenes.

I also remember thinking was how embarrassing the whole thing was and how MJ looked like he was wearing a V For Vendetta mask. But amazingly, people bought into this new, decidedly masculine perception and MJ became truly BAD!!! From then on MJ portrayed himself as a butt-kickin,’ gun-totin’, fist throwin’ bad ass in a Sgt. Peppers outfit.

And it just didn’t work for me — in fact, this whole image transformation turned me off of MJ because it just seemed so false, like a lie. I far preferred the Smooth Operator — the MJ with the amazing voice, the gravity-defying dance moves and all those classic songs, not some grotesque, phony-baloney travesty in Kabuki face.

It seems just as false in the case of Justin Bieber — this latest incident reeks of a phony PR stunt. What’s next, Robin Thicke is revealed as a noted Hollywood Boulevard pimp? Willow Smith sprays a Burger King with bullet fire from her Uzi?

It’s kind of sad to see this emasculation of the male image being committed by celebrities who are only try to sell a perception, and not the real thing. I’m guessing that if a Justin Bieber ran up against someone truly intimidating, say a deranged chainsaw-wielding stalker or David Letterman, and not some overweight photographer, his options would be to 1) pee his pants, or 2) get his bodyguard to take care of it.

In the meantime, celebrities who truly could kick ass, true bad asses like Jet Li or Jason Statham or even Stallone, are all at home drinking tea, counting their money and slathering Ben-Gay all over their tender joints. And celebrities who occasionally really do kick ass, say noted hotheads Sean Penn or Russell Crowe, guys who can lay a good ass-stompin’ on you, or at least throw a cell phone at you, are getting all soft and paunchy on us.

So I guess we have to look to Justin Beiber as the next top model of sheer American masculinity, that is, until One Republic get arrested for ripping off Slurpees from the 7-11.

* It wasn’t reported whether the alleged chest pains were the result of being punched, kicked or even head-butted in the chest (does Bieber know Tae Kwon Do?) or the direct result of being morbidly obese — have you seen some of those paparazzi? Loading up on donuts, coffee and hot dogs as you hang around outside of Jennifer Aniston’s house can really add up. I guess running after George Clooney’s car doesn’t fall under the category of exercise.

2 Responses to Essay: Those Kick-Ass Celebrities!