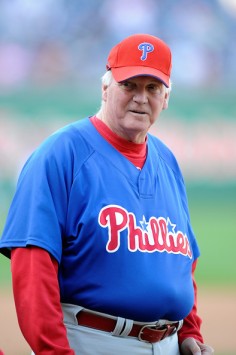 Sometimes I think deeply about things of absolutely no consequence. Sometimes I ponder the universal answers behind questions no one else give a s*#t about. People say I’m wasting time mentally pontificating about who invented the trouser zipper, or how the sponge became the most common of kitchen items. But I don’t care. I’m not the type of person who likes not knowing, and like Jerry in the ‘Seinfeld’ episode where he seeks an explanation as to why his girlfriend won’t sample the apple pie, I need to know!

So with baseball season literally days away (GO SF GIANTS!!!), I again come to a question I ask frequently during the course of seven month season (including playoffs), especially in that saggy midsection before the All Star break when things get a little dull and there’s very little else to think about. Why are baseball managers the only coaches in professional sports who wear a uniform?

Hockey and basketball coaches wear suits, football coaches wear a weird amalgamation of polos, sweatshirts and khakis cinched up to the nipples. Yet baseball managers have traditionally worn the classic players uniform, no matter their age or body type. I’m thinking that part of this is because baseball players always seem like such big kids, playing a kids game; the proverbial “boys” of summer.

And that baseball uniform look can be cool if you’re all athletic like A-Rod or Ryan Howard. But when you’re body shape-challenged, like Philadelphia Phillies manager Charlie Manuel (pictured above), the look can be less than flattering. In fact, I’m not sure bursting at the seams is a real good look for anybody, except perhaps Jennifer Lopez or Beyonce.

Still, God bless ’em, there they go, trotting laboriously out of the dugout at any opportunity to jawbone an umpire, or leaning up against the clubhouse railing, furiously chewing their gum, looking to all the world like a big kid in their too-tight uniforms.

Surprisingly, the reason behind this has nothing to do with aesthetics. Typical of baseball, it’s all based on tradition, going back to the sports earliest days when the manager was the guy who ran the team’s day-today businesses and operations (the bean counter, if you will), while the on-field team was run by the team captain, who was also a player, so he would naturally wear the uniform. There were a few on-field captains who were not players, and they wore suits.

But as time went on teams captains became less likely to play as they took on heavier on-field managerial roles. But that didn’t keep them from hanging up the uniform in favor of a nice Armani suit, perhaps as a way to better connect with the players. You might be management, but you’d rather be seen as one of the guys. And I guess that continues to work because managers are still wearing uniforms today, no matter how ridiculous they look.

Personally, I think grown men parading around looking like they’re still in Little League is fairly silly. I also believe a suit really makes the man. It’s a respect thing. I can get behind a Phil Jackson who’s dressed to the nines in some finely tailored suit. But when I see Charlie Manuel squeezed into some painfully tight uniform, watching the buttons pop off his shirt from the strain, all I’m thinking is, “Dude, lay off the dugout hot dogs.”

My solution would be to have the manager wear something that’s more a little more deserving of a man of his considerable stature and experience, and something that would separate him from the players, affording him yet another level of respect. While I love a hot Italian suit, I must agree that they’re a tad too formal for the baseball dugout. It should be informal, comfortable, but something that would still say team general.

I know he was vilified in the end, but I always thought Joe Paterno had a good sideline look, one that would befit many a baseball manager, what with the loose sweater (in team colors, natch) over a nice button-up, comfy pair of khakis and the sensible shoes that should be worn by anyone who’s running out to the pitcher’s mound every five minutes. During the hot summer months you simply trade the sweater and shirt for a sporty polo. Now, that would be a hot look for Charlie Manuel!

But I suppose I should give Mr. Manuel a break. He’s one of the game’s premier managers, taking the Phils to two World Series, winning the series in 2008. He might have even gone to the Series the past two seasons as well if the Giants hadn’t kicked their asses in 2010, and if they didn’t roll over and play dead to St. Louis last season, when it was pretty much expected that the Phils would win the Series. Of course, now he has all those awful Philadelphia fans demanding retribution for the massive collapses of the last two seasons. That’s a lot of pressure!

So no more snide comments about how that baseball uniform makes him look like a big blue penguin. He’s going up against years of baseball tradition and a lot of unflattering lycra, and that can’t be easy.