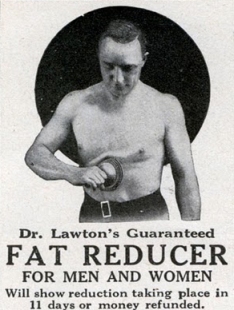 For as long as there has been rational man, there have been irrational myths and legends that have left people puzzled, frightened, intrigued, or bemused. The Loch Ness Monster? Space aliens? Bigfoot? And how the heck did those crop circles get there? Perhaps it’s the allure of the unexplainable, the mystery of strange things that few have seen, and that even fewer still can explain, that make myths and legends so fascinating. At heart we want to believe that there’s a sea monster in Scotland or a devil in Jersey.

Not that’s there anything wrong with it. Believing in cultural myths is harmless diversion. But buying into fitness myths without knowing the truth behind them can be debilitating, defeating and downright dangerous. There are a million of them out there, so we’re here to weed out the strange from the true, and dispel some of the myths that may be holding you back from your fitness goals and good health.

Cutting out carbs is a sensible way to lose weight: Scientific fact states that the body processes the sugars in carbohydrates as energy. Carbs are literally your body’s fuel supply, and while they’ve been vilified as of late, cutting back on carbs is a better idea than cutting them out entirely. It’s the nature of the starches you’re eating that may be the real issue. Cease and desist with the white flour, processed sugar and baked potatoes. Choose instead carbs that sit low on the glycemic index, such as brown rice, wheat pasta or soba noodles and whole grain breads. These carbs burn slower and more efficiently, allowing glucose (blood sugar) to be introduced into your system as energy rather than processed as fat.

Crunches alone will produce six pack abs: Sadly, obsessively working your core isn’t enough to give you the six-pack abs of an Australian surfer. While it’s a good start, the secret to developing impressive abs is to melt the layer of fat that’s hiding them, mainly through a high-spirited cardio routine. No matter your cardio exercise, the idea is to get your heart rate up and keep it there for a sustained amount of time. Intensity will vary with the fitness level of each individual, but aim for thirty to forty minutes of prolonged cardio activity three or four days a week. Couple that with a lean diet and even you can have a belly that you could grate cheese on.

It’s possible to isolate areas of fat loss: The popular concept of spot reduction, where fat can be trimmed from specific parts of the body, couldn’t be more false. The bottom line is that fat burns evenly and comes off all over the body rather than in any one place. Those trying to lose those pesky love handles most usually embrace this idea of spot reduction. But the truth is that the obliques (or side abdominals) are muscles like any other, and they will grow with resistance training, adding even more volume to the waistline area. Again, a combination of weight training, cardio and proper nutrition is the most sensible way to lose body fat.

More weight is lost through cardiovascular training than with weight training: Because of its amazing ability to burn calories well after the event, the slight edge goes to weight training. Your body experiences a metabolic spike as it struggles to recover from a vigorous weight lifting session, an action that sheds another 25 percent of the calories you burned as you worked out. Also, since muscle takes more energy to sustain, for every three pounds of muscle you build, you’ll burn an extra 120 calories a day. Do the math – that’s about 10 pounds a year! Cardio, of course, has its obvious advantages, and a logical combination of weight and cardio training, along with a healthy and sensible diet, is the foundation of any effective weight loss or fitness routine.

Eating spicy foods can help you lose weight: This is one hot myth that’s absolutely true. Capsaicin, the active ingredient in chili peppers, is a thermogenic agent that increases metabolic activity, which creates heat that burns fat and calories. It’s estimated that capsaicin can significantly raise metabolic levels for over 20 minutes after it’s eaten. Capsaicin can also helps lower blood pressure, fight inflammation, is loaded with Vitamin C and is thought to have cancer-fighting properties. So splash some hot sauce on your turkey chili, or toss a few diced jalapenos into your egg white omelet – if you dare!

No pain, no gain: It’s natural for your body to go through a number of uncomfortable physical sensations as you exercise — fatigue, distress, nausea — but pain should not be one of them. If you’re experiencing actual pain when exercising, then something is seriously wrong. Pushing through pain only increases the chance of making a small problem painfully bigger. It is far wiser to rest an injured body part than to push past your limit. The only result of your macho bravura is an even worse injury and longer recovery time. Listen to your body!

With inactivity, muscle will turn to fat: This myth, of course, is physiologically impossible since muscle and fat are two distinct and separate tissues, and it’s impossible to turn one into the other. What actually happens during periods of inactivity is that muscle tone decreases while body fat increases, giving the illusion muscle has turned to fat. Your muscles are still there; only now they’re wearing a big, fat coat. And while we’re on the fat/muscle connection, muscle does not weigh more than fat. A pound is a pound, no matter what it’s made of.

Fruit is fattening: It could be their high sugar content that gives fruit this bad, and undeserved, reputation, but cutting fruit from your diet is almost as bad as cutting out carbs. Fruit is packed with vitamins, nutrients and antioxidants, and is a natural source of, yes, sugar. But the sugar in fruit is efficiently distributed so glucose is stored in muscle or used as immediate energy while fructose goes to the liver for brain fuel. So look to fruit for your midday sugar rush rather than vending machine snacks.

Running is bad for the knees: This one is true and false. It’s true that constant pounding, particularly on hard surfaces, will have a detrimental effect on the knees. Also, poor running form can have a bad effect on all of your joints. So while running is a great cardiovascular exercise, it’s something that’s best done in moderation. 40 minutes three times a week is fine. Aim for soft surfaces like grass or trails when running outside. But if you’re gym bound you have a great chance to vary your cardio workout. Inserting a day or two of exercise bike or elliptical into your weekly routine will give your knees a break and add some variety to your workout.

You’re too old to start: People will conveniently use age as an excuse to put off or avoid getting themselves into shape. The truth is that no dog is so old that it can’t learn new tricks. The body is a marvelous, incredibly efficient machine, but like any machine, it needs to be worked or it will fall into rust and disrepair. And it wants to be worked. The beauty of the human body is that it always responds favorably to positive energy. No matter your age, there’s something you can do that will bring fitness and exercise into your life. So get started today. Don’t let the clock dictate your future.