What’s My Beef: Out Of Town Invites 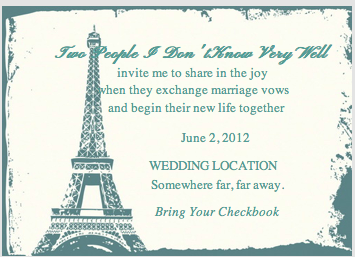 A friend of mine recently asked me to serve as an usher at his upcoming wedding, and I, being the loyal friend that I am, of course said I’d be honored. Seconds after pledging my total commitment, he then informed me that his wife-to-be is from San Diego, 505 miles south of here, and that’s where the wedding will be held. If you listen closely, you can actually hear the bonds of friendship being sorely tested.

Which leads me to today’s beef: wassup with people whose special gatherings require you to travel great distances and spend lots of money?

To me, getting an invitation to out-of-town soirées like weddings, anniversaries or family reunions is like receiving a bill; you’re being charged to attend this event. In my case, after airfare, a three-day, two-night hotel stay, tux, meals, drinks, taxis and various other add-ons, it’s a bill for a little over a grand. Oh, and let’s not forget the obligatory gift.

Which is another source of irritation: after forking out a hefty sum to attend the event, you’re also supposed to bring a gift. Haven’t I spent enough? As my Mom used to say, I’m not made of money. In my opinion the only gift I should be required to bring is the pleasure of my presence, especially since I have a well-earned reputation for contributing greatly to the spectacle of the pageantry.

I know this makes me seem ungrateful (not to mention really, really cheap), but personally I would have a big problem asking family and friends to shell out a lot of money and effort just to watch me get hitched (or to watch me do anything, for that matter), especially in this economy.

But people only seem to think about how special it will be to hold a special moment in a special place, even if that place is halfway around the world. “Let’s get married in Fiji.” “We should hold the family reunion in Disneyland!” They never think of the special inconvenience and cost this bill, er, invitation, incurs on the invitees. 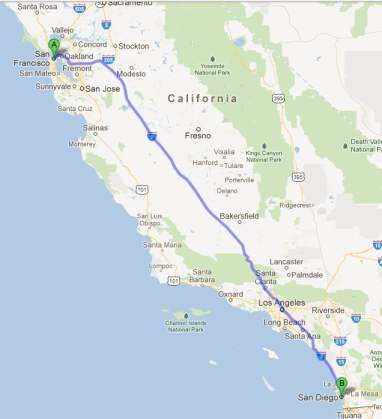 After all this griping one might rightfully ask: if its such a pain in the ass, why did you accept? Well, that’s a good question, one that I really don’t have an answer for. I guess it seemed like a cool idea at the time, and I’m always up for a good road trip. The prospect of meeting up with mates from my advertising agency days also intrigued me.

But that’s was before the financial debacle that was Tax Day; before money got a little tight and breakfast, lunch and dinner became Top Ramen noodles. But since I’ve already responded in the affirmative, I guess I’m committed (which is what I should have been when I thought this might be a good idea). I’m a man of my word, and it would be rude of me to back out now, two weeks before the event.

Besides, after racking my brain I’ve concluded there is no excuse believable enough that doesn’t scream, “I rue the day I accepted an invitation to your stupid wedding!” I know I would be insulted if someone did that to me (especially if they’ve already chosen chicken over the fish), and the bad feelings that will inevitably develop just wouldn’t be worth it.

So on June 1 it’s off to San Diego I go. After all this griping, though, I’ll probably wind up having a blast, and after a few glasses of what better be very excellent red wine flecked with specks of gold, the cost of the weekend will soon become a distant memory, as will, eventually, my hotel keycard, cell phone and underwear, if history serves me well.

The lesson learned here is don’t commit to something if you’re not 100% into it. I have a history of doing that, and the results are always the same: massive regret and the wanton spending of money.

So if any of you in the global blogosphere are thinking of inviting me to your event (if only for the rollicking entertainment I supply), please think twice. I’ll be glad to send a card and heartfelt declarations of congratulations, but don’t expect me to attend, even if you are serving very excellent red wine flecked with specks of gold.

1 Response to What’s My Beef: Out Of Town Invites