It’s not just Tuesday; it’s New Music Tuesday on iTunes, a weekly event that’s not quite like Christmas, after all, they’re not giving it away, but it still comes bearing some pretty sweet gifts. Today’s offerings include “MDNA,” the new stinker from Madonna, and a new album from Nineties bad-asses Garbage.

Apparently the members of Garbage no longer hate each other, or maybe they all need rent money, but there’s a reunion I never thought I’d see happen. But it’s not a big deal; Garbage had a cool look, a few good songs, and like a lot of bands from the Nineties, that was pretty much it. Throw in the needlessly inflamed egos (“I produced Nevermind!” “I was in Terminator: The Sarah Connor Chronicles!”) and their flame-out arrived right on schedule.

I gotta admit, though, the Biebs is rocking a cool, Chris Isaak-ish pompadour thing with his hair, at least in the promo shot I saw. I hesitate to say something like “Justin Beiber’s looking like a young Chris Isaak” because Chris Isaak might be out there reading (and why not?), and I know he was a boxer, or he might still be a boxer, so he could kick my ass real good.

Oh, look! Katy Perry has something new out – haven’t heard from her in while. Another rerelease of Teenage Dream? Girl, seriously — enough! 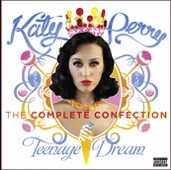 What’s the deal with Katy Perry? She projects this wild child persona, so daring, so bold with the blue hair and the wild relationship with Brit bad boy Russell Brand and the kooky videos and all. But her music is as bland and safe as cotton candy. It’s assembly line music for the new millennium, splash some sexy paint on it, market it relentlessly until it’s ubiquitous, make sure it appeals to all ages and demos so it sells a gazillion units. I also call this “The Black-Eyed Peas Syndrome.”

I know … just go away already (then again, Madonna went away, and look how that turned out). But if you’re like me, and you’re suffering from Katy Perry Overkill, prepare to suffer even more this summer when her concert film comes out! Even better … it’s in 3D!

There’s a lot of other new stuff on the main page, but sometimes I like to go right to the Just Added page, which is a comprehensive list of music releases that might not be mainstream or noteworthy. Like, who knew Nineties one-hit wonder Cowboy Junkies has a new one out? Anyone? File with Garbage (the band, not actual trash or refuse, although it will probably wind up there) under Nineties Irrelevancy.

Here’s a band called ELOS. Now, I have to ask, did anyone connected with this band think or suggest that maybe, just maybe, people might get them mixed up with ELO, aka, Electric Light Orchestra, kings of late seventies pop prog-rock (including, unfortunately, the soundtrack to “Xanadu”)? Just askin’.

Eighties synthpop hitmakers Erasure have a new one out! And the next question is … Why?

But let’s not get stuck there. Sometimes you make the most awesome discoveries on the Just Added page, and today’s is a new album from Cannibal Corpse, which is titled, appropriately, “Torture.” And with song titles like “Followed Home Then Killed,” “Encased In Concrete,” “Intestinal Crank” and “Caged…Contorted” this is the feel-good album of the year.

Upon research, I was surprised to learn that Cannibal Corpse is well known enough to have their own Wikipedia listing, and as you might guess, they fall under the death metal category. They’ve released twelve studio albums since 1990, and I’m sure you’ve all sang along to such faves as “Rancid Amputation” (from 1991’s “Butchered At Birth”) and “Scalding Hail” (“Evisceration Plague,” 2009).

Now I’m sure there are a lot of people out there who really get something meaningful from that whole death/thrash metal scene, but I just don’t understand it. Like hard-core rap, it doesn’t seem very nice. I feel like I’m being yelled at, and that makes me uncomfortable. Not that I need or want my music all neat and tidy, but there’s something disturbing about the imagery behind a song called “Severed Head Stoning.”

And it’s not like there’s one or two shockers amongst ten other songs. They’re ALL like that, and quite frankly, I gotta wonder about the psychic state of someone who writes a song called “A Skull Full of Maggots.” What was the thinking that went on during the conceptualizing of “Devoured By Vermin?” Anger management, anyone?

But I guess if your lead singer calls himself “Corpsegrinder,” your bound to come up with a little ditty like “Blunt Force Castration.” I just listened to the 90-second preview.

Tune in next week for more observations from New Music Tuesday!

This is the voice of a man searching for meaning